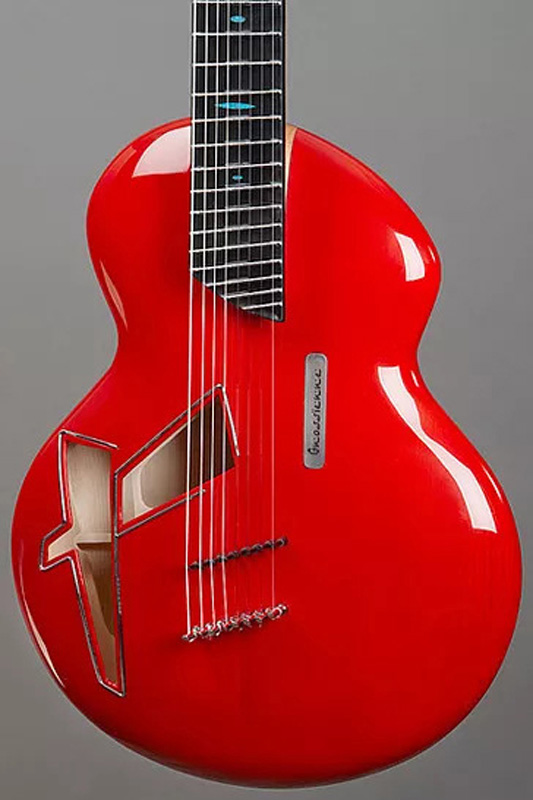 The Gnossienne is an eight-string electric lute built with an astonishing design. Jean-Yves Alquier named it after composer Erik Satie’s Gnossienne No.1. Unlike the composition, no one has yet mastered this instrument. In fact, Alquier is uncertain the musician destined to play it is even born. Whoever he or she may be, they would have to be of a different mindset.

The Gnossienne is the third and last of Jean-Yves Alquier’s conceptual triptych. It was presented at Montreal Guitar Show in 2011 and was featured on Premier Guitar’s cover in September 2011.

With only nylon strings, the Gnossienne is tuned A-E-A-D-G-B-E-A. The extra A strings expand the bass and treble registers. Unlike a lute or a guitar, the Gnossienne’s sound projects inwards. 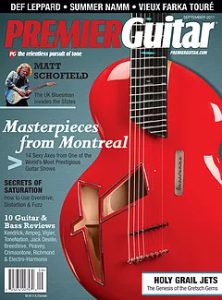 The hot-rod inspired red body is actually a shell. The soundboard is located inside. It uses fan bracing, with two spruce tips surrounding a carbon-fiber center. The strings sit on carbon-fiber saddles that look like pistons, driving the vibrations to the inner soundboard. Alquier uses a Highlander pickup to capture the interior sound.

Alquier was inspired by the Orpharion, a six to nine metal string 16th-century lute. The Orpharion featured slanted bridges and fridges. The Gnossienne has multi-scale fanned frets, ranging from 25.2” (640mm) for the high A to 26.4” (670mm) for the low A.

Also inspired by the sitar, Alquier built a concave fretboard. It’s made of composite, with black powder suspended in a resin base. Small pedestals support the frets.

Alquier designed and built all the parts except for the Rodgers tuners, the Highlander pickup system, and Savarez strings. The high A is a lute string.